Reductions: Under 18, Students (MAX 27 years), Groups (min 15 pax), Military. The title of the reduction must be shown at the entrance.

I Musici Veneziani in the famous and exciting "The Four Seasons" by Antonio Vivaldi: four concerts for violin and strings representing the scenes of nature in music, each inspired by each season of the year. The program is also enriched by three other important concerts for strings.

A Tribute to Antonio Vivaldi in a live classical music concert

Antonio Vivaldi's Four Seasons is one of his most recognizable and beloved classical music compositions, and you likely already know parts of it by heart. Vivaldi, who was born in Venice, was a true virtuoso who is best known as a Baroque composer, but he was also an exceptional violin player and teacher. Not everyone knows, however, that he was also a Roman Catholic priest who composed most of his major works during a 30-year stretch when he worked at an orphanage in Venice.

The Four Seasons is a series of violin concertos that were revolutionary at the time they were composed — around 1716 or 1717 — for their innovative use of instruments to conjure up the sounds of nature. Hearing Vivaldi's Four Seasons in Venice is the best way to experience the vibrant vision that lives among the notes. You may never have imagined that a barking dog, a buzzing fly, a rushing creek, chirping birds, a violent storm, a crackling fire, and so many other sounds characteristic of the seasons could make themselves known through orchestra music.

Vivaldi's Four Seasons in Venice, performed by the professional musicians of I Musici Veneziani orchestra, is an exceptional tribute to one of the city's most talented sons. The Baroque majesty of these violin concertos transports all who hear it to a special place of beauty, where time stands still. The color and vibrancy of perfectly harmonized sounds join together to provide an unforgettable journey through the changing face of nature.

The four seasons in Venice with artists in period costumes

You may have heard Vivaldi's Four Seasons in Venice as the background music in a shop or in a hotel, because it is such a common and well-loved composition. But the real way you should hear this exquisite piece of Baroque classical music is to fully immerse yourself in an experience that makes you feel as if you have truly been transported back in time. The only way to really do this is to hear the concertos performed in a Baroque setting, with musicians dressed in authentic period costumes. And this is possible, when you attend Vivaldi's Four Seasons in Venice at the Scuola Grande di San Teodoro.

The artists of I Musici Veneziani orchestra perform the magic of Vivaldi while dressed in costumes designed from original specifications of the Baroque era. The costumes are designed and produced by the prestigious Atelier Nicolao in Venice, where sumptuous fabrics and intricate details come together in garments that bring back the prosperity and aristocratic atmosphere of La Serenissima, the Venetian Republic.

Vivaldi's Four Seasons in Venice at the Scuola Grande di San Teodoro is a classical music concert you will carry with you long after the notes have ended. The performance will transport you back to a time centuries ago, when classical music was a complex and beautiful way to express not only sounds but also emotions, thoughts, ideas, and dreams. When you hear I Musici Veneziani take up their instruments to give full voice to Vivaldi's vision, you'll understand why it has delighted centuries of listeners around the world. 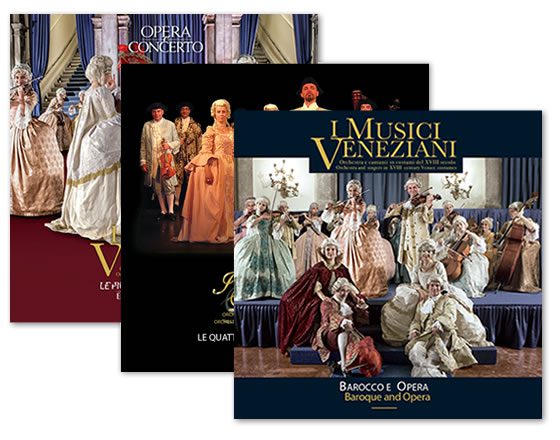